This other blog (see link below) was created to display my decorative items for sale. However as time passes by, the time to paint for sale just eluded me

No special reason as to why I still have this blog... maybe it's just to remind me..... that's where and how I started to be where I am now :)

All items shown are hand-painted personally by yours truly... but now I focus on commissioned jobs. So, I do take orders... but the queue is long... sorry :( .... but if you are willing to wait in the queue... I'm more than obliged to paint for you..... It would be an honour!!!!

The Art of Intarsia

For those interested in knowing more about the art of Intarsia, below is a summary from an article by Robyn Ryan, History of Intarsian.
Intarsian (marquetry or inlay) is the art of 'painting' with wood on furniture. During the 14th and 15th centuries, marquetry was practised in Italy, the technique evolving through the Florentine School of Marquetry. Benedeitto da Maiano (AD 1444-1496) is credited as being responsible for the style of marquetry we know today, although the art form did not become popular until the 16th and early 17th centuries.
Marquetry is a craft whereby the marqueter makes intricate pictures and geometric designs by cutting and fitting together thin pieces of coloured wood (veneer) or other such highly prized timbers for their colour and lustre (cedar, satinwood, ebony, blackwood, rosewood, mahogany), other precious materials such as tortoiseshell and mother-of-pearl, inlays of gold, pewter and silver. When the picture is complete it is attached to items of furniture.
This was very labour intensive and expensive to produce and as such was only available to royalty and those of high society. Thus traders and carpenters were always searching to entice buyers by making their wares different. They quickly adapted the marquetry style and created veneer painting. Instead of using precious metals, shells and rare woods, they created a special paste made out of grounded maize, called it Kleister medium, add paint to it and created patterns with this mix by using coarse brushes and various other tools and stencils.
Today life is much easier for the craftperson. We no longer have the laborious task of cutting stencils and making maize paste. Instead we use low tack masking film, water-based paints and commercially produced Kleister medium. We also use MDF Board or inexpensive pine with a base of yellow or gold to give a rich undertone to the veneer painting. This is then antiqued to give the aged mellow tone of marquetry that most of us find unobtainable but still desirable.
Anyway, as the story goes .... Zaharah brought her friends over 2 weeks ago to view my work. Kak Maznah was impressed by my Intarsian tray that I did in 2003 and requested for a class. Since time is of the essence in doing this technique, a workshop was created ... and that was exactly what we did last Wednesday, 18Jan 2012 ... my first workshop for the year :) 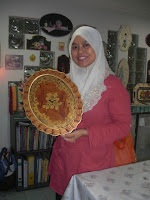 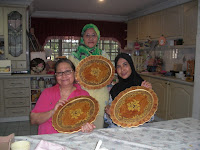 The 4 ladies keen to take up the task :)
It was a tedious laborious job as one needs to have patience and steady hands and the passion to persevere, but it was a job well done by these 4 ladies. What remains now is to shade and antiqued the plaque ... and there you go ... an heirloom to be passed on down the generations :)
Posted by Nora's Touch at 9:42 AM

Hey there! This is a good read. You have such an interesting and informative page. You also have a very good choice of colors and a very good taste in art. I will be looking forward to visit your page again and for your other posts as well. Thank you for sharing your thoughts about decorative arts. I am glad to stop by your site and know more about decorative arts. Keep it up!
The distinction between decorative and fine arts has essentially risen from the post-Renaissance art of the West, where it is for the most part meaningful. It is much less so when applied to the art of other cultures and periods, where the most highly-regarded works often include those in "decorative" media, or all works are in such media. For example, Islamic art in many periods and places consists entirely of the decorative arts, as does the art of many traditional cultures, and in Chinese art the distinction is less useful than in Europe. Even in Europe, the distinction is unhelpful for Early Medieval art, where although "fine arts" such as manuscript illumination and monumental sculpture existed, the most prestigious works, commissioned from the best artists, tended to be in goldsmith work, cast metals such as bronze or other techniques such as ivory carving. Large-scale wall-paintings were apparently much less regarded, relatively crudely executed, and rarely mentioned in contemporary sources; they were probably seen as a cheap but inferior substitute for mosaic, which in this period must be treated as a fine art, though in recent centuries contemporary production has tended to be seen as decorative. The term "ars sacra" ("sacred arts") is sometimes used for medieval Christian art in metal, ivory, textiles and other high-value materials from this period, though this does not cover the even rarer survivals of secular works.
For over two decades Kaminski Auctions has sold important pieces of American and European furniture and decorative items, from prestigious names like Samuel McIntire, Herter Brothers, Horner Brothers, and Stickley.

Oh my! Thank you for the knowledge ... it makes a difference when the comment comes from one who is well learned in the subject. I have no formal training ... what I know and understood is from what I read .. and nobody else can tell me for the better. Once again thank you for the insight :)

have a great day .... and oh! Merry Christmas n a Happy New Year!

The Art Of Intarsia said...

With the advent of modern tools such as the electric scroll saw and sanders, Intarsia has enjoyed a renewed interest among hobbyists and craftsmen. Various pieces of wood, with different colors and textures, are chosen and carefully cut and sanded to fit together into a three dimensional work of art resembling a jig saw puzzle.

My kind of music...click play to listen ;)

Welcome to my world of colours. I'm Nora, I'm a decorative artist. I paint on anything that doesn't move!
I love to paint and I'd like to share this love with you my friend... let the magic begin...

Nora's Touch
Kuala Lumpur, Malaysia
I'm a full-time mom who has gone crazy with decorative painting since 1998... I'd now like to welcome you to my store of colours. Yup, I paint on anything that does not move!!!

I love to do still life and this is a sample I drew on a tea-pot placemat...so get yourself a cuppa of your favourite drink as you browse through my world of colours....

My painted pieces... click onto the pic to view more

Some of my students' works of art

Nenek, this is for you

Nenek... you are like the candle that burns itself to light the path for others to see. Nenek was my beloved grandma. May she rest in peace.

My Partners in Crime

Aniza Khir Omar and Zaitun Ramli...2 beautiful talented highly creative ladies are in cahoots with me. Yup!Yup!Yup!...to all you people out there grab our book Amaze Yourself with Stunning Projects available since June 2008.

Please do visit Aniza's page at http://decorative.typepad.com/ and feast your eyes on her gorgeous works. Everytime I go to her home studio I go really wide-eyed, cross-eyed, green-eyed and every other possible adjective related to admiration and ENVY!!!... just can't have enough of her really really really beautiful works of art.

Zaitun's page, I believe, is still under construction. I'll link you to her as soon as it's ready. For those of you living in KL you'd probably have seen Zaitun's works perhaps in a friend's house, or at gift shops in the Amcorp Mall in PJ and the SACC Mall in Shah Alam. She paints on furniture and she specialises in roses...beautiful dreamy roses. Wait for her page and the pictures will speak for themselves.

P/S : Zaiton has finally constructed her blog ;) Please check her out at www.olivefolkart.blogspot.com

A footnote to all...

I am a decorative artist... not a true artist in the real sense (God ...how I wish I can paint pictures off my mind without referring to anybody's painted works). Unfortunately, I need to be inspired by works of my idols...what I'd painted are usually inspired by them. You'll know who they are from the lists below...have a look-see and be inspired by them too...and oh btw...please feel free to email me at norana_g@hotmail.com should there be any enquiries, comments, suggestions, etc :)

My Favourite Decorative Artists and Painters

My Source of Inspiration

Check them out too...they are my friends

The HAPPIEST people DO NOT necessarily have the BEST of all...they only APPRECIATE what they find on their way ~ Warren Buffet

Don't do what others say, just listen to them, but do what you feel good ~ Warren Buffet

Life is too short to wake up with regrets. So love the people who treat you right...forget the ones who don't. Believe evrything happens for a reason. If you get a second chance, grab it with both hands. If it changes your life, let it. Nobody said life would be easy, they just promised that it would be worth it ~ anon

Don't compare your life to others'. You have no idea what their journey is all about. Make peace with your past so it won't spoil your present. Life is too short to waste time hating anyone.